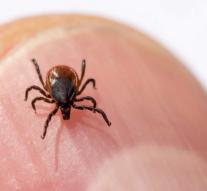 - Health authorities in Spain are trying to avoid the deadly Crimean-Congo virus is spreading. On August 25 passed a 62-year-old man at the Gregorio Marañón Hospital in Madrid to the virus which is transmitted by ticks. A nurse from the ICU who treated him has become contaminated, so the Ministry of Health writes Thursday night on its website.

It is isolated and her condition would be stable. People who have been in contact with the two patients are also monitored.

Crimean-Congo virus is regular in Africa, the Balkans, the Middle East and parts of Asia. Who is first infected show symptoms of seasonal flu with the virus. Later follow internal bleeding. The virus can be transmitted by an infected tick, but can also be transmitted through contact with body fluids such as blood and vomit from infected persons.