Home / World / Deadly hotel attack Kabul is on the rise 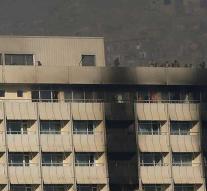 kabul - Because of the attack on a hotel in Kabul, at least 24 people were killed this weekend. According to the Afghan Ministry of the Interior, it concerns eighteen citizens, including fourteen foreigners. The six attackers have also been killed.

The six dropped into the Hotel Intercontinental around 9:00 PM local time. Special units then required seventeen hours to eliminate the entrenched attackers.