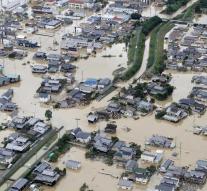 tokio - The death toll due to the heavy rainfall in Japan has risen to at least 66. Sundays, too, rivers ran off their banks, forcing millions of people to leave their homes, Japanese media report. Dozens of people are still missing.

Because of the torrential rain, parts of the southwest of Japan are flooded. In some places, three times as much rain has fallen as on average throughout the month of July. Also, parts of the country are affected by landslides.

The city of Kurashiki, with just under half a million inhabitants, is the hardest hit by the extreme weather. At least a thousand people are surrounded by the high water, including a hundred in a hospital. Rescue workers try to evacuate people with the help of boats and helicopters.

'We have never experienced this kind of rain,' said a spokesman for the Japanese Meteorological Agency during a press conference, 'This is an extremely dangerous situation.'

Around 56,000 emergency workers have been deployed. At least 2 million people have been evacuated for fear of flooding and landslides. The emergency response service has advised another 2.3 million people to leave the area, although in some parts the rain has stopped and the water level has dropped. More than a quarter of the prefectures of the country warned of landslides. Hundreds of houses have been damaged.

In the affected region are the metropolises Fukuoka, Nagasaki and Hiroshima.