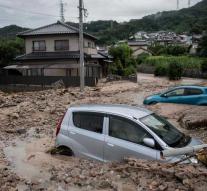 tokio - The death toll in Japan as a result of the heavy rainfall and flooding has risen to over 100. Dozens of people are still missing, the Japanese authorities report. Because of the heavy thunderstorms and associated torrential rains, parts of the south and west of the country are flooded.

In some places, since Thursday, when it started to rain, three times as much rainfall as on average throughout the month of July. Also, parts of the country are affected by landslides.

The city of Hiroshima seems to have been hit the hardest by the extreme weather. Only 39 people were killed in that city. Certainly 54,000 rescuers, including soldiers and police officers, try to evacuate the people with the help of boats and helicopters.