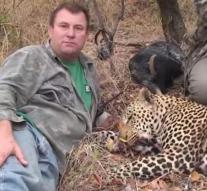 - A South African hunter came to life in Zimbabwe on Friday afternoon when a dead elephant killed him. Theunis Botha, 51, was on track with a group of hunters when she encountered a group of elephants. Because the mothers wanted to protect their children, they stormed on the hunters.

Botha and his colleagues then shot the elephants. Botha managed to shoot down three elephants, according to Netwerk24. Another hunter shot down an elephant near to Botha.

That could not dodge the falling seaweed. He was crushed and died on the spot.

The hunter leaves a woman and three children. Theunis Botha was known in Zimbabwe as an infamous hunter and poacher. He also often hunted dogs with large animals on large animals.