Home / World / Deadly earthquakes Lombok is on the rise 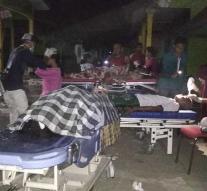 jakarta - The death toll due to the heavy earthquakes on the Indonesian island of Lombok has risen to 555. The Indonesian emergency response service BNPB reports this Friday. At least 77,000 houses have been destroyed by the earthquakes. Almost 400,000 islanders live in emergency shelters.

Lombok, which lies to the east of the holiday island of Bali, has been hit by a series of earthquakes and aftershocks since July 29. On August 5, more than 460 people were killed by an earthquake with a magnitude of 6.9 on the island. Last Sunday the island was hit by two heavy earthquakes with a force of 6.5 and 6.9. The fact that there were fewer casualties this time, is because the quakes continued further away and deeper into the sea.

The Indonesian government estimates the economic damage caused by the earthquakes at about 440 million euros, but assumes that this amount will increase.