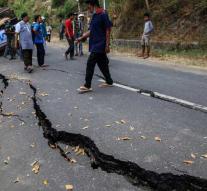 jakarta - The official death toll due to the Sunday earthquake on Lombok has risen to 387. This is reported by the BNPB emergency response service. About 13,700 people have been injured by the violence of nature and 400,000 people have had to leave their homes. The death toll is likely to rise even further, there are still people stuck in collapsed houses or mud.

The earthquake of Sunday had a force of 6.9 and caused enormous damage on Lombok. Almost 75 percent of the residential buildings on the northern part of the Indonesian island have been destroyed, the service says.

The ground on the island has been shaking repeatedly recently. The island was shaken by an earthquake with a force of 6.4 at the end of July. At that time, at least seventeen people were killed. Last Sunday, a more powerful quake of 6.9 occurred, followed by a series of aftershocks.