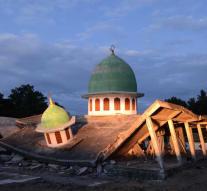 jakarta - The official death toll due to the Sunday earthquake on Lombok has risen to 321. This is reported by the BNPB emergency response service.

The earthquake of Sunday had a force of 6.9 and caused enormous damage on the Indonesian island. Thousands of people have become homeless and a lot of infrastructure was damaged, which made it difficult to provide assistance. Lombok, which was popular among tourists, was hit by a powerful aftershock on Thursday with a strength of 6.2.

Earlier it was reported that at least 347 fatalities would have fallen.