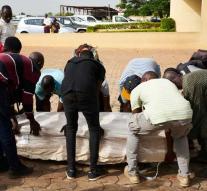 bamako - By an attack on the headquarters of the anti-terrorist brigade of the Sahel countries in the centrally located Malinese city of Sévaré, at least six soldiers were killed on Friday. According to a spokeswoman for the UN peacekeeping mission in the African country (Minusma), the attackers used explosives and automatic rifles.

The G5 Sahel partnership was formed last year to put an end to jihadist violence in this part of Africa. In addition to the host country, Niger, Burkina Faso, Chad and Mauritania supply military personnel to these special forces. The area has been terrorized for several years by extremists who have links with Islamic State and al-Qaeda.