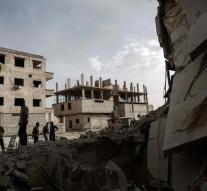 damascus - The Islamic State group conducted a surprise attack on Kurdish militia in northeastern Syria on Tuesday. In addition, 37 people, including a number of Iraqi refugees, killed activists from the Syrian Observatory for Human Rights. Dozens of people got injured.

The extremists attacked Kurdish units of the Syrian Democratic Armed Forces (SDF) at Rajm al-Salibi, not far from the border with Iraq. At least five suicide commands blow themselves up. In the fights that followed, the SDF also attacked displaced civilians who tried to flee to SDF area.

The Kurdish YPG militia is the main power of the SDF, which has captured large parts of Northern Syria on IS over the past year and a half with US support. The SDF received the majority of Tabqa on Monday. Tabqa is a strategically located city on the Euphrates, 40 kilometers west of IS Raqqa IS.