Home / World / Deadline of the pipeline Mexico rises to 79 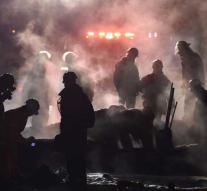 mexico city - The death toll by an explosion Saturday in a pipeline in Mexico has risen to 79. The Mexican Minister of Health reports that another 66 people in hospitals are being treated to their...

According to the state government, the pipeline was torn with fuel. When people tried to fill containers with fuel at the leak, the pipe exploded. The incident happened Friday in the village of Tlahuelilpan.

Violent incidents in pipelines are increasingly common in Mexico. Bendes try to illegally tap gasoline and sell the fuel on the black market.

Due to measures taken by the government, there is a shortage of petrol at several filling stations.