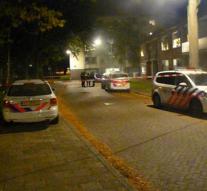 almelo - The woman Sunday night at her house in the Ruyterstraat was found dead in Almelo, the 29-year-old Ribanna Montfoort. The young employee of a law firm is most likely killed by a crime. Police have detained a man for questioning.

What exactly happened is still unclear, but some neighbors heard a bang Sunday reminiscent of a shot and moments later saw a man hiding in the bushes in front of the house. A neighbor reports that the police there also somebody arrested and taken away. Ribanna'd rather that Sunday had a fight with her boyfriend occasionally spent the night with her. It is feared that she was shot by him. The forensic team of the police has done all night study in the home.

Ribanna was a beloved neighbor, so it can be seen from the shocked reactions in the street. She had often claimed as she walked her dogs. She was a member of a club that bred golden retrievers and performed with Bowie, one of her four-legged friends also regularly participate in show competitions.