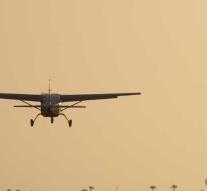 ottawa - In Canada, two planes were flown in the air against each other. One of the two aircraft, a Cessna 150, then crashed. The pilot did not survive the accident, reports the police to CBC.

The other plane could safely land at Ottawa International Airport. The two occupants of the Piper Cheyenne remained unharmed. The pilot told Air Traffic Control that the Cessna hit the bottom of his aircraft and partly damaged his landing gear.

The Cessna collapsed near the village of Carp, southwest of the capital Ottawa. The cause of the accident is investigated.