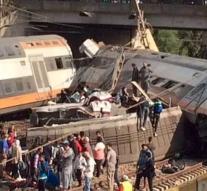 bouknadel - A passenger train derailed to the north of the Moroccan capital, Rabat. Moroccan media reported that at least six people were killed and 72 injured. This is only a provisional balance according to the local authorities. Images of the drama show a lot of twisted steel and sometimes also turned trains.

The derailed express train was on its way from Rabat to the northern Kénitra.