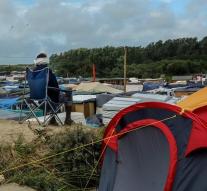 - A brawl between Sudanese and Afghan migrants in Calais, the French took on the night of Monday to Tuesday a Sudanese asylum seeker's life.

Another fifteen migrants were injured, the authorities informed according to local newspaper La Voix du Nord.

The fire struck Tuesday morning a badly wounded man near the so-called Jungle, a makeshift settlement of migrants waiting for an opportunity to stabbing to England. The Sudanese, thirty, not much later succumbed to his injuries. He lay on a field near the A16. There gather to climb every night migrants hoping in a truck traveling to the other side of the Channel.


The migrants try to force vehicles to stop and then get into the truck. It is often accompanied by a lot of pushing and pulling.

Last month there were even one person dead and several injured in a brawl between Afghan and African asylum seekers.