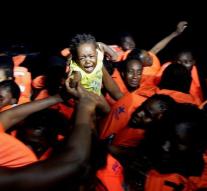 - At least four people were killed when a boat full of migrants was attacked by a vessel labeled 'Libyan Coast Guard. The attackers tried according to aid organization Sea Watch to steal the boat engine, reports the BBC.

The vessel with the refugees was according to the aid agency intercepted a speedboat. The crew climbed aboard the refugee boat and began allegedly sticks to beat him.

The attack would panic broke out among the migrants. Many of the people on board would thereby have fallen into the water. Sea Watch said it had reached about 120 people from the water. Around 25 people are still missing.

The Libyan and Italian coast guard allowed us to have not known the BBC know with the incident.