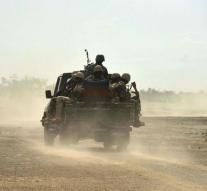 yaounde - In a bomb attack at a mosque in Cameroon near the border with Nigeria on Wednesday slain at least eleven people. A suicide bomber probably belonging to the jihadist group Boko Haram blew himself up in a tent where the faithful were preparing to use a meal to break their fast during Ramadan.

The explosion in Djakana also were four people injured, said a local driver. An officer of the Cameroonian military said the perpetrator was a young boy.

The origin of Nigerian Boko Haram has slain in the last seven years more than 15 000 people in Nigeria and the neighboring countries of Chad, Niger and Cameroon and driven 2 million to flee. The armies of these countries have ousted the jihadists from their most strongholds, but the group continues to terrorize the population. For dozens of suicide bombers have been deployed by the group of teenage girls.