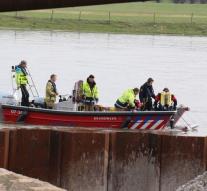 huissen - A collision on the Lower Rhine near Gelderland Huissen has this morning taken at least one rower life. In the second missing person is still being sought by dive teams, sniffer dogs, helicopters and ships with sonar equipment. A total of around forty people involved in the search.

The pair got together with three other members of the rowing club Arnhem Jason water after their match rowboat was involved in a collision on the Pannerdens Channel, as part of the Lower Rhine is called in Huissen.

The five people on board, according to Secretary Frank jibbing rowing club Jason experienced rowers and reasonable age. 'They rowing regularly on the Lower Rhine and the Pannerdens channel,' says jibbing.

Immediately after the notification of the emergency services have launched a massive search. Of the three paddlers who could be saved, there is one resuscitated on the spot. He's with the other two, which could come out of the water on their own, transported to the hospital. Two of them showed hypothermia.

Spokesman Marco Misset of the Safety Gelderland-Midden considered the chance of survival by the minute less. 'Around 13 ur our fears came true with the discovery of the body of one of the two missing people,' said Misset.

Meanwhile, the search is continuing this afternoon. Shipping in the area of ​​the Lower Rhine region- the Pannerdens channel- has been shut down as a result of which transit towards Germany and Rotterdam is curdled and delayed.