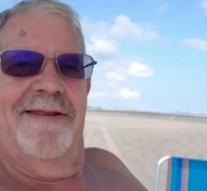 sorocaba - The 51-year-old Simone de A. was arrested in Sorocaba (Brazil) for the murder of a 73-year-old Dutchman. The death of Hans van Denderen was probably concealed because the woman sent messages of his name to, among others, the man's relatives. This is what Jose Antonio Proença Martins de Melo, spokesman for the police in the Brazillian Votorantim, says in a conversation with the news site Globo.com. Simone denies having murdered Hans.

According to the news site, the body of Van Denderen was seen by passers-by on the side of the road on 21 October in a neighborhood of Sorocaba. The victim had, writes Globo. com, stab wounds in the chest and a deep cut in the neck.