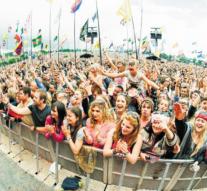 glastonbury - a man killed in the 20 at the site of the famous British Glastonbury Festival. The festival goer was discharged with burns in an ambulance and later died. What exactly happened is still unclear. The police is not a crime.

The man died a few hours after the accident in hospital in Bristol. 'His family has been informed. Our thoughts go out to the families, 'said a spokesman for the festival organizers.