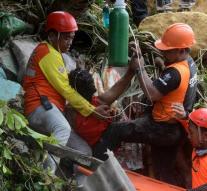 manila - A landslide has swallowed more than twenty dwellings on the Philippine island of Cebu. At least four people were killed, the authorities say. Rescue workers take into account that possibly dozens of other people are under the rubble.

The buried houses are located near a limestone quarry. There, after heavy rainfall, earth and rocks began to slide. 'Because of the landslide about 20 to 24 houses are buried. All people present there are stuck, 'said a police officer. Rescue workers have certainly found four people alive.

The island state was recently hit by the heavy typhoon Mangkhut. According to the police, the official death toll as a result of that storm is 88, but is likely to rise further.