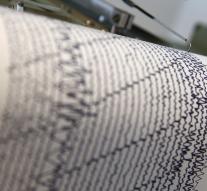 - A woman is Saturday in the Argentine town of El Galpon killed when they came under a fallen wall during an earthquake. To our knowledge it is the only fatality of the quake in the north of the country. Which had a magnitude of 5.9 and occurred at a depth of ten kilometers .

Several people, according to local authorities in the province of Salta ended up in the hospital. Many houses have been severely damaged by the quake.