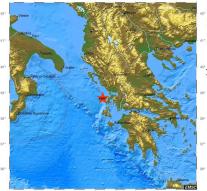 athens - Thousands of people Tuesday in western Greece in panic into the streets run after an earthquake. The quake had a magnitude of 6.1 and its epicenter was about five kilometers below sea level, a few kilometers northwest of the island of Lefkada. A woman came according to local media killed when a wall collapsed.

The quake was felt around the port of Patras and the Olympia region. Also on the island of Corfu was shaking the ground. The damage from the quake seems to be with.