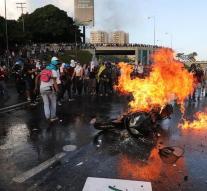 caracas - In protest against the government on Friday, a 22-year-old demonstrator was killed in the Venezuelan capital, Caracas. According to the public prosecutor of the South American country, the man was shot when security forces wanted to drive a demonstration.

Since protests against the government of President Nicolás Maduro have begun, 76 people have now come to life and killed more than a thousand injured. According to an opposition spokesman, the security forces shot tear gas, causing fifty people to get injured.

In Venezuela, demonstrations have been demonstrated almost twice a day against the government for more than two months. The opposition demands new elections and an improvement of human rights. Maduro dismisses the protest as 'a foreign plot against the country'.