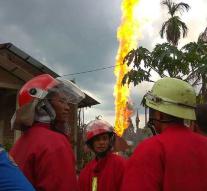 jakarta - A fire in an oil well near a village in the Indonesian province of Aceh has killed at least ten people on Wednesday. Dozens of others were injured.

According to the Indonesian disaster management agency, the 250-meter deep source flooded, after which villagers tried to collect the oil. Possibly, welding activities caused the fire or someone smoked near the well, which would have been illegally constructed.

Local media report that at least three houses went up in flames. Flames can be seen in photographs that protrude meters above the village.