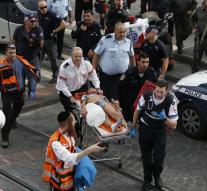 Two Palestinian teenagers aged twelve and thirteen year fell to a train station a guard. One of them stabbed him in his upper body. The guard shot him. The boy was injured. Passengers overpowered the other attacker.

The 37-year-old man who attacked two security people at the Damascus Gate in the Old City, survived that. He brandished a knife when one of the guards shot him. The man later died in hospital. Elsewhere, a Palestinian shot dead in Jerusalem who ran down waving a knife at security men while he called God is Great.