Home / World / Dead and wounded in earthquake with force 7.5 on Sulawesi 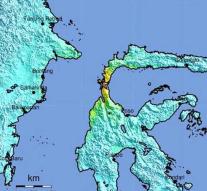 jakarta - The Indonesian island of Sulawesi has been hit by two powerful earthquakes. Certainly one person was killed and at least ten other people were injured. 'We expect more damage and more victims,' ​​stressed a spokesman for the emergency response service.

Due to the first earthquake, with a force of 6.1 on the Richter scale, several houses collapsed. Later a second quake followed the coast. It had a magnitude of 7.5, reports the US seismological institute USGS.

The Indonesian authorities initially came with a tsunami warning and called on residents of coastal areas to evacuate. That warning has since been withdrawn.

Due to a series of earthquakes, nearly five hundred people died on the holiday island of Lombok last month, a few hundred kilometers southwest of Sulawesi.