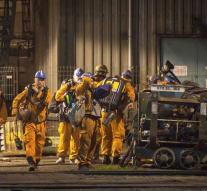 karvina - Due to an explosion in a coal mine in the east of the Czech Republic at least five miners were killed, at least ten were injured. Eight comrades are still missing. That has a...

According to the spokesman, a mixture of oxygen and methane gas exploded at a depth of about 800 meters.

The company fire brigade and rescue service are looking for possible victims and survivors. The mine has been in operation since 1968 and has been modernized a few years ago. The shafts and corridors go to a depth of 1. 100 meters.