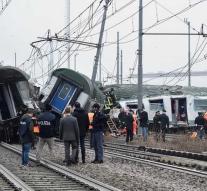 milan - By derailing a train in Seggiano di Pioltello, a suburb of Milan, at least two people were killed. There were also dozens of injured. At least ten injured are in bad shape, according to the Italian news agency ANSA.

The accident took place in the morning rush hour. The authorities were unable to say anything about the cause. A number of people would still be trapped in the train.