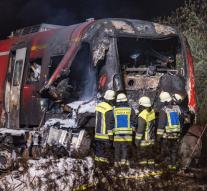 - A collision between a train and a truck late Thursday in the German Freihung (Bavaria) at least two people were killed. At least five people were injured. They are, according to the police are not in danger.

The accident happened on a level crossing. That passenger train collided with a truck carrying a military vehicle with a trailer. The truck was under the police dragged hundreds of meters by the train, then flew both vehicles on fire. The army vehicle remained largely undamaged.

The drivers of the train and the truck would not have survived the accident. The passenger of the deceased driver was able to escape with minor injuries. In touching the train as far as known four people injured. The came around forty other passengers escaped with a shaking.