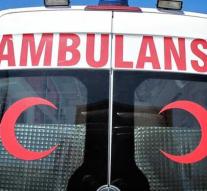 ankara - At least eleven people were killed in a bus accident in the Turkish province of Eskişehir. Also, dozens of passengers were injured when the coach hit the road and rammed a tree.

According to the governor of the province, 46 injured. It is still unclear how many people were in the bus. There is also still uncertainty about the cause of the accident.

The police have stopped the two drivers of the vehicle, news agency DHA. Most of the occupants reportedly were families from capital Ankara.