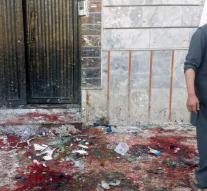 kabul - At least seven people were killed Sunday by a suicide attack in the Afghan capital Kabul. Approximately 35 people were injured. The Ministry of Health said that the perpetrator struck a center where proof of identity was issued.

The perpetrator had come to the center in a Shiite part of Kabul on foot. The proofs of identity were handed out there with a view to the parliamentary elections later this year. The responsibility for the attack has not been claimed.