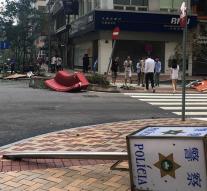 zhuhai - In the Macau Region, at least eight people died as a result of the tropical storm Hato, which hit the area on Wednesday. Several people are still missing, according to the Chinese government channel TDM. It's about the heaviest storm since 1968.

Wind speeds were measured at 200 kilometers per hour. The city would look like a war zone and the storm causes a lot of nuisance. For example, flights are canceled, do not drive the trains, and their parking garages are running out. Most casinos in Macau, which the region is famous for, are open. They have an aggregate.

Macau is located by the sea, in southern China, near Hong Kong.