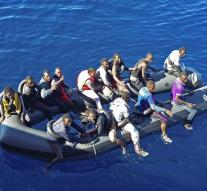 - At least four people have died after Thursday off the coast of Morocco boat sank. This was reported by the Spanish coast guard on the authority of a young woman who is rescued from the Mediterranean Sea. The fate of at least 35 refugees remains unclear.

The Spanish Coast Guard found the boat Thursday afternoon north of the Moroccan port of Al Hoceima. Fifteen migrants clinging to the upturned boat, were rescued and taken to the southern Spanish port of Málaga. According to the woman were sure 54 people on board.

The dead were seen from the air by a Colombian military helicopter, which helps in the search for missing persons.