Home / World / Dead and injured in riots in Venezuela 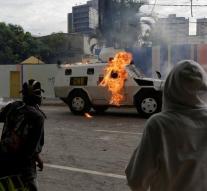 caracas - In violent riots between demonstrators and the police in the Venezuelan capital, Caracas, Wednesday injured 161 injured when a armor truck entered the crowd. In another part of the city fell one dead.

According to the mayor of the Chacao district, a man became severely injured by the armored car. He is out of danger of life. The hospital in Chacao has only treated 161 wounded. The vehicle was flown after it was hit by a Molotov cocktail of the protesters. Who protest against Socialist President Nicolás Maduro and demand new elections.

At the demonstrations in another part of the city one dead has fallen. In the Mercedes district, a 17-year-old demonstrator was killed, the mayor of the district was known. Since the protests in early April, thirty people have died in Venezuela and more than 1300 people were arrested.