Home / World / Dead and homeless by monsoon in India 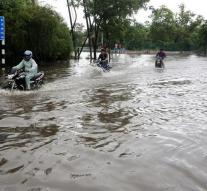 - Heavy monsoon rains have caused over the weekend in India for 22 people dead and 170,000 homeless. Meteorologists offer little prospect of improvement in the weather. They expect more precipitation.

The amount of rain is unprecedented, estimated there was last week, 35 percent more than usual in this monsoon period.

The deaths occurred mainly in the state of Madhya Pradesh. There also were about 70 000 people lost their homes due to the sharp rise Narmadarivier washed away many shelters. The government is trying as much as possible to evacuate people to avoid more casualties. In the state of Assam had to leave already 100 000 people their homes.