Home / World / Dead and evacuations after new weather in Chile 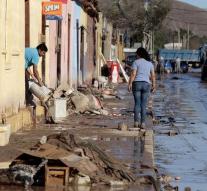 coquimbo - Floods after heavy rainfall in northern Chile have killed two dead and about 1500 people had to be evacuated. The government announced Sunday the state of emergency in the region.

54,000 inhabitants of the area are sealed off or rinsed off the outside world without water and electricity. The two dead were in a car that was carried by a flood.

South America has been hit hard times this year by emergency weather. 'Our country has been clearly affected by climate change, which again indicates this distress,' said Chilean President Michelle Bachelet in China, where she is currently visiting state.