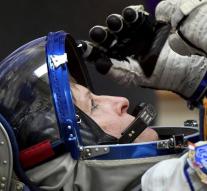 astana - The launch of a spacecraft from the Russian launch base Bajkonur in Kazakhstan to ISS space station reveals two people in June to cost a living. A technician died of his injury due to a steep fire caused by a crash missile component. A driver of a car came to death, who was looking for the wreckage with others, reported the Kazakh Ministry of Defense and Space Industry Saturday in Astana.

The Russian Soyuz rocket was launched on 14 June. After 117 seconds, the burned first rocket strike hit back in the target area in north-east Kazakhstan. In the dry, hot desert, the still burning debris caused a steep fire in an area of ​​one hundred square kilometers, according to the Russian press agency Interfax. The search in this area led to the death of the driver, the technician was still alive from the fire.

The space ship with 2.5 tonnes of stock on board arrived at ISS without any problems two days later.