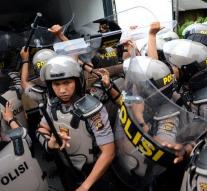 jakarta - In riots in a prison on the Indonesian island of Bali, four people died, police reported Friday. Two prisoners were slain Thursday by a fight between two gangs in prison. Near the Kerobokan prison were gang members attacked each other again then, with two more casualties.

When the gang twist no foreign prisoners have become involved. The prison in Bali is like all other prisons in Indonesia, overcrowded.