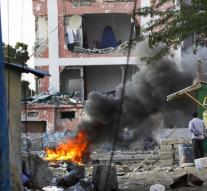 - At least eight people have been slain in an attack on a hotel in the Somali capital Mogadishu. This was reported by al- Jazeera on Sunday morning. Two car bombs went off in front of the building in the center of the city. After that the building was stormed by armed men. Dozens of people were injured.

The police and the perpetrators end up after storming into a firefight. The perpetrators had machine guns at them, said agents. The hotel Sahafi it is attacked, is often frequented by foreigners and government employees.

Fighters of al- Shabaab claimed responsibility for the attack. That terror group has already committed several attacks in Mogadishu.