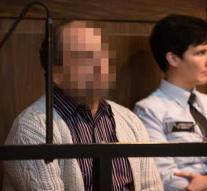 brugge - The Belgian Ivo Poppe, also known as the 'deacon of death', has been sentenced to 27 years in prison for five murders, including on his mother. The so-called Assize Court in Bruges imposed this punishment on Thursday on the 61-year-old dying counselor from Wevelgem. The Public Prosecutor had demanded for life.

Poppe worked as a nurse for years and stated that in the 1980s and 1990s he applied euthanasia to 'up to twenty people' by injecting air into their veins. Because it is unclear how many and which victims are involved, the people's jury only judged the known cases.

The jury declared Poppe guilty on Wednesday for murdering his elderly mother, father-in-law, two uncles and a patient. He was acquitted of a sixth murder.

Poppe acknowledged that the victims had not asked for death, but he wanted to ease their suffering. He said to have 'a great deal of regret'. According to his lawyer, he acted from 'boundless empathy. 'Counsel had argued for fifteen years in prison due to mitigating circumstances.