Home / World / De Morgen: iodine pill is the farce of the year 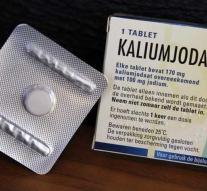 asse - The Belgian newspaper De Morgen calls the iodine pill 'already the farce of the year.' In the country in the past few days 4.6 million boxes containing ten potassium iodide pills of 65 milligrams have been distributed, on the advice of the health authorities.

In Belgium, nuclear material is used at five locations. The best known are the nuclear power stations in Doel and Tihange. Everyone in a radius of 20 kilometers is advised to bring in iodine tablets as part of a new emergency plan for nuclear incidents.

The newspaper went to a pharmacy in Zoersel where towers filled with boxes of iodine pills. Almost no one came to pick them up. Every Belgian pharmacy has to purchase at least 480. The pharmacist, Isabel Vreven, explains that although the tablets are intended for children and adolescents and pregnant women, especially elderly people come with questions.

'In Zoersel on Tuesday, we immediately had a number of eighty-year-olds who came to claim their box. Yes, it was free, everyone was entitled to it, they had seen on TV. While it is actually advised to not take an iodine pill after 40 years. It does not really have an effect after that age. '

A pharmacist from Asse finds the accompanied brochures confusing. His clients thought they should take the pills immediately. 'I have to explain to people all the time that they should not take those pills now, but preferably three hours before the nuclear disaster. If they ask me how they should be able to guess that a nuclear disaster will occur in three hours, I say: yes, I do not know either. '