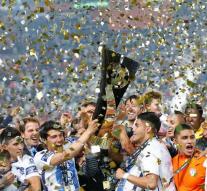 The deal is not yet round, but may be announced in the coming days, Bloomberg newspaper reports. DAZN would like to pay about 600 million euros to UEFA. According to Bloomberg, the agreement will enter into 2018 and will apply for three seasons.

DAZN streams to smartphones, tablets, smart tvs and game computers. It is active in Germany, Austria, Switzerland and Japan. DAZN already has broadcasting rights for La Liga, the Premier League, the Serie A and the Ligue 1. In addition to football, the platform also sports tennis and basketball, American football, baseball, ice hockey and rugby. It wants to be a kind of Netflix of sport.