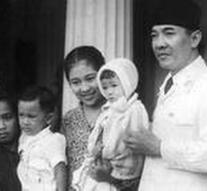 jakarta - Indonesian police that with the arrest of ten demonstrators, including a daughter of the first president Sukarno, a coup attempt was nipped in the bud. Seven of the ten activists suspected of treason, the English-language Jakarta Post reported Saturday.

According to the National Police wanted the group to use a mass protest against the governor of Jakarta for their own political agenda. Their plan would have been to occupy the House of Representatives and thus a coup.

The demonstration turned basically about the Christian governor quoting it has ventured from the Koran. This has aroused the ire of a group of conservative Muslims.

Among the suspects is Rachmawati Sukarnoputri. She is the daughter of Sukarno, the man Indonesia declared independence in 1945 in the Netherlands and ruled the country until he was deposed by General Suharto who officially succeeded him in 1967.

Another daughter of Sukarno, Megawati Sukarnoputri, reigned from 2001 to 2004. She refuses to date any comment.