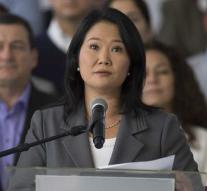 lima - The daughter of Peruvian former president Alberto Fujimori is arrested, just like her father last week. Keiko Fujimori is the leader of the opposition in Peru. She is suspected of being involved in money laundering, her lawyer told local media.

Keiko Fujimori was arrested when she wanted to make a statement to the Public Prosecution Service about the case. The Ministry of Justice is investigating, among other things, whether Brazilian construction company Odebrecht has transferred money to its party. The company has admitted having bribed officials throughout Latin America.

Alberto Fujimori was arrested again last week after amnesty was granted earlier this year. According to the Supreme Court in Peru, his release was unconstitutional. Fujimori, who led a right-wing government in the period 1990-2000, received a prison sentence of 25 years for crimes against humanity and fraud. He had finished ten of those.