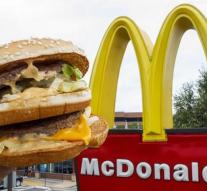 indianapolis - A 39-year-old woman on Sunday assaulted her 60-year-old mother with a cheeseburger at a McDonald's in downtown Indianapolis in the US state of Indiana. When police arrived at the scene, the mother was covered in ketchup, mustard and pickles.

According to the local station FOX59 mother and daughter had a heated discussion. The daughter would have said that she wanted her mother's death.

Attacked the mother would have gone to McDonald's with her granddaughter. When she was in her car, she was attacked. Why is not clear.

The woman who attacked her mother fled in another car. She is still being sought by police.

Attacked the mother is treated for her injuries.