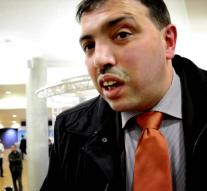 brussels - The daughter of an alderman in Brussels municipality Molenbeek has been arrested for suspicion of ties with terrorists. According to Belgian media, she would have intimate contacts with a member of a terrorist cell in Jumet, a suburb of the Walloon city of Charleroi.

It is the daughter of Ahmed el Khanouss, elder Sport in Molenbeek. According to the politician, it is a misunderstanding. According to him, his 20-year-old daughter Inès has fallen in love with one of the members of the terrorist cell that kept her 'deeds and ideas' hidden from her, he says in a statement. 'My daughter has become the victim of a wrong love relationship. 'The alder says to be shocked by the arrest.

Molenbeek is seen as the heart of the Belgian muslim terror.