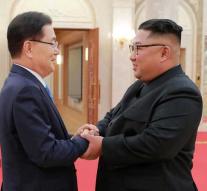 seoul - The leaders of North and South Korea hold a summit from 18 to 20 September. That is what both countries have announced. The North Korean leader Kim Jong-un also stated that the Korean peninsula will have been denuclearized as an American president within the first term of Donald Trump.

On Wednesday, a delegation of senior officials from South Korea arrived in Pyongyang to prepare the summit. The termination of the nuclear program in North Korea is the most important issue. It is the first time that Kim mentions a term for this.

Kim went on to say that his belief in Trump is 'unchanged.' After the historic meeting and the agreement between Trump and Kim in Singapore in June, the relationships fell into a dip again.