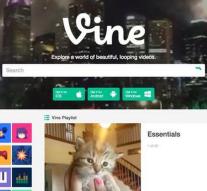 san francisco - Private data of Vine users may be leaked. Mother company Twitter has warned the affected users that their mail address and phone number may have been shown shortly. It is not known whether the information has come into the wrong hands and has been abused. It is also not known how many disabled users it is.

Twitter pulled the Vine plug this year, but kept the videos that were already uploaded in a Vine Archive.

Vine was launched in 2013. Initially, people with the app could share six-second home-made videos with the world, but later it was extended to 140 seconds.