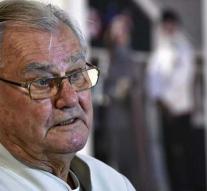 copenhagen - The Danish prince Henrik died on Tuesday night in royal palace Fredensborg. The husband of Queen Magrethe has become 83. His deceased did not come unexpectedly. The prince, who suffered from Alzheimer's disease, was hospitalized at the end of January.

On Tuesday, the Danish court announced that Prince Henrik had been transferred to the royal palace to spend his last days there.